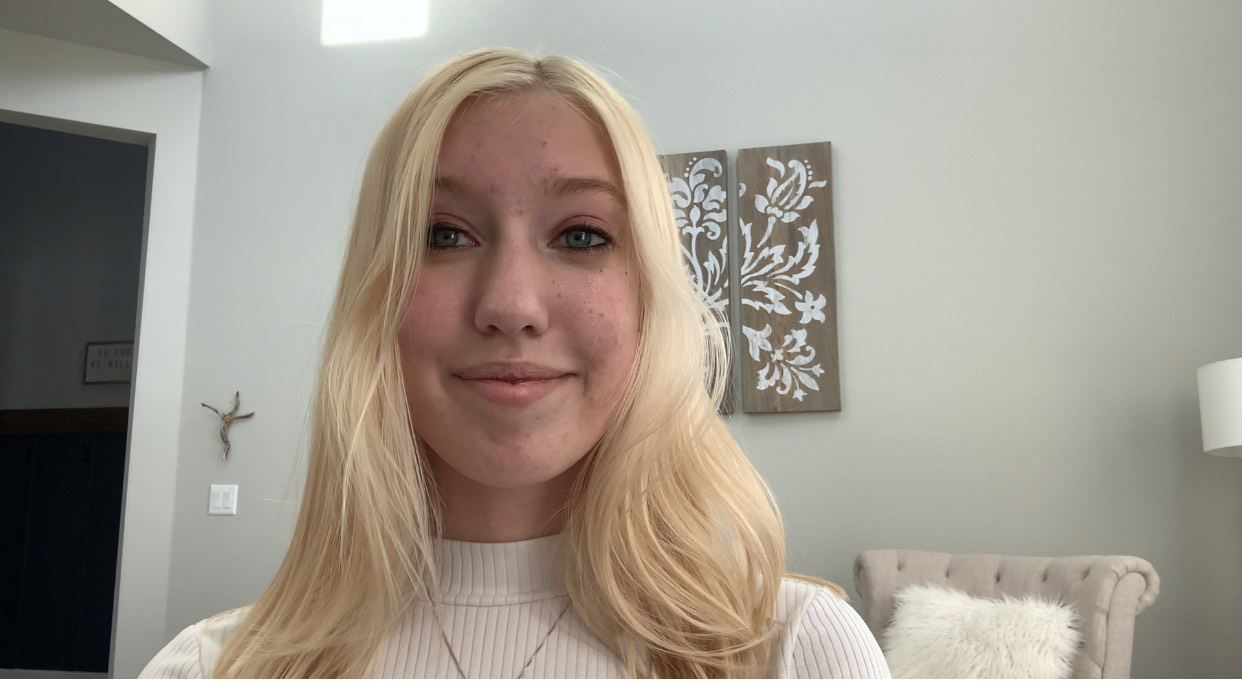 Claire’s story: Just one person can make a difference

Claire Huber (she/her) is a committee member on PCMH’s Youth Committee for Mental Health, representing Erie, Colorado. Below she shares her story. Learn more about YCMH and how to get involved. You can also apply to serve on the YCMH for the 2022-23 school year – applications due Oct. 4!

When struggling with mental health, the most important thing one can do is ask for help. Reach out your hand, and I promise you, someone will help. Having someone there, supporting you, trying to help, can make a world of difference, even if it’s just one person.

For roughly the last two years of my life, I’ve been struggling with an eating disorder. More specifically, anorexia nervosa. There were a variety of factors that contributed to my struggle, including genetics, social factors, stress, issues with my body image… and so many other things.

I am currently in recovery, and I have one person, more than anyone else, to thank for that. My freshman year, I started doing group tumbling classes with my school’s cheer team at a private cheer gym in Northglenn, Colorado. Near the end of the year I chose to begin weekly private lessons with Coach Alec* in order to progress my tumbling in time for tryouts. I had no idea how much that decision would benefit me in the coming year.

Throughout the summer leading into my sophomore year, my eating habits continued to go downhill, and it was beginning to take a major toll on both my mental and physical health. In July, I started to consider telling Alec what I was going through, because I knew I needed help, and I knew I could trust Alec. But I was afraid that he would tell my parents, and I was afraid he would think of me as a “burden.” In all honesty, I think there was some small part of me that was convinced I was making it up for attention. But I wasn’t – that was the eating disorder talking.

One August night at a team practice, I was hit with a wave of dizziness and had to sit out for the rest of practice. At this point, no one knew what I was going through with my eating. No one. I played it off like it was no big deal, but when I got home that night I knew that something needed to change. I had a private the next day, but I knew that I would get scared and end up not saying anything. So, I dm’d Alec on Instagram and said, “Hey, I’m kind of going through something and I need help, can we talk about it tomorrow?” He responded immediately and told me he would be happy to help.

The next afternoon when I got to my private, I told Alec that the real reason I had been dizzy at practice the night before was because I hadn’t eaten anything that day. I think he could tell how nervous I was, because the first thing he did was tell me how glad he was I had told him. He asked me a few questions, and reassured me that if I ever needed anything, he’s only a message away. Before I left that day, he gave me a big hug and told me he was proud of me.

I’ll be honest with you, my sophomore year was really, really hard. Not only was I dealing with an eating disorder, but multiple other personal struggles, and the stress of everything I was dealing with was only making my eating habits worse. Every time I went to practice, it was like an escape from the chaos that was the rest of my life. I knew that when I walked into that gym I was safe and in the presence of people who care about me.

When things would get too overwhelming, I would reach out to Alec. Sometimes I wouldn’t even have to reach out, I would just show up and he could somehow tell that I was having a rough day. He was always happy to help, whether that meant listening to me rant (and I always had a lot to rant about), giving me advice, giving me fruit snacks from his snack stash, or just joking around and providing a distraction. Alec and I are very similar people, with a very similar sense of humor, so it was always an easy distraction when I needed one. When I needed help, he always encouraged me to tell my therapist and my parents, but when I told him I wasn’t ready he never pressured me.

In October, Alec put me in contact with another coach, Leah*, who’s a mental health counselor and used to work at an eating recovery center. Talking to Leah (via email) was incredibly beneficial for me, because she helped me understand what recovery could look like, and also encouraged me to tell my therapist and parents.

In mid-November, I told my parents the very basic details of what I was going through. They started to make sure I was eating, but because I hadn’t told them everything, they didn’t know the level of help that I needed, and it was easy for me to fall back into my old habits.

In January, my eating got even worse. Leah emailed me to check in, and I told her that it was getting bad again. The next day at my private, Alec told me Leah had asked him to check in on me. I told him everything that had been going on, and he helped me figure out what to do next.

February of my sophomore year was one of the worst months of my life. I was going through a lot at school, and I didn’t know who I could trust. Because of all of this, my eating habits were worse than they’d ever been. I dm’d Alec and told him I was relapsing and really needed his help. At my private that week, we talked about it a little and then just went on practicing. But near the end of my private, I got really, really dizzy. I was very close to passing out, and Alec told me that we should talk to Leah. The three of us went into the office, and I told them everything that had been going on.

We were in that office for two hours.

By the time I left, we had called my mom and told her what was going on. And because I was with two adults who knew everything, they wouldn’t let me downplay it the way I had before.

I remember feeling super guilty about Alec & Leah having to spend that much time with me, trying to convince me to tell my mom – and doing most of the talking when we told her. But one thing Alec said stuck with me – “Don’t ever feel bad about reaching out. I wouldn’t check in on you, and respond, and sit here to have this conversation, if I didn’t want to. I am SO proud of you, and I’m so glad you trusted me enough to ask for help, this week and back in August.”

This goes to show what I said before – even just one person can make the biggest difference in youth mental health. If you’re struggling, please reach out. And if you’re a coach, or teacher, or parent, or manager, or neighbor, and someone who’s struggling reaches out to you, support them. They may be hesitant at first, but it could make a major difference in the progression of their life. Just having someone that worries about you, and checks in, and does everything in their power to help means the world when you’re hurting.

If you had told me a year ago that all of these things would happen, that I would be doing this much better, I don’t think I would believe you. Alec pulled me out of a really dark place, and I can say with 100% certainty that I would not be where I am today if it weren’t for him and his support. I will never be able to thank him enough for that.